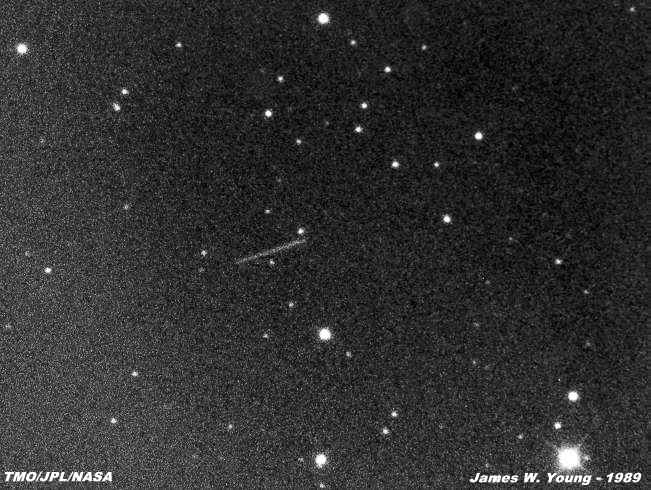 This photograph was taken with a Kodak IIa-D Spectroscopic 4 X 5 glass plate at the cassegrain focus
of the 24-inch relecting telescope operating at f/16 at Table Mountain Observatory. This long 60 minute
exposure was taken tracking on the stars (sidereal rate), and shows the motion of the asteroid mainly due
to the earth's movement in its orbit during the exposure. The asteroid image is said to "be trailing" during
the exposure. By measuring the precise length (angular) of this 'trail' against the many background stars
generated during the exact 60 minutes of exposure, one can determine the distance to the asteroid.

Provisional designated 1982 TH, 'Jim Young' is a main belt asteroid orbiting the sun once every 3 1/3
years some 208,500,000 miles from the sun. It is estimated to be somewhere between 5 and 10 miles
in diameter. The method of giving the provisional designation is as follows: 1982 for the year, the 'T' for
the period October 1-15, and the 'H' (the 8th letter of the alphabet) as the 8th object so discovered in
the that time period.

Astronomers can determine the exact orbit of an asteroid by measuring its precise position as seen against
the background stars on numerous photographs taken over a period of many years. This technique, called
astrometry, uses offset measurements of many precisely known stars in the same photographs. Accurate
orbital calculations for newly discovered asteroids are required before they may be formally named. Once
these orbital parameters (elements) are established, an asteroid is given a permanent number...in this case,
number 2874. After this time, the discoverer may name it.

Asteroid 2874 was discovered by E. Bowell at the Anderson Mesa Station of the Lowell Observatory in
Flagstaff, Arizona, on October 13, 1982. This asteroid, after a precise orbit had been determined, was
named in honor of James W. Young, resident astronomer of the Table Mountain Observatory, because of
his ongoing photometric research of asteroids begun in 1968.