This is a photograph of a very bright Leonid Fireball on November 17, 1966 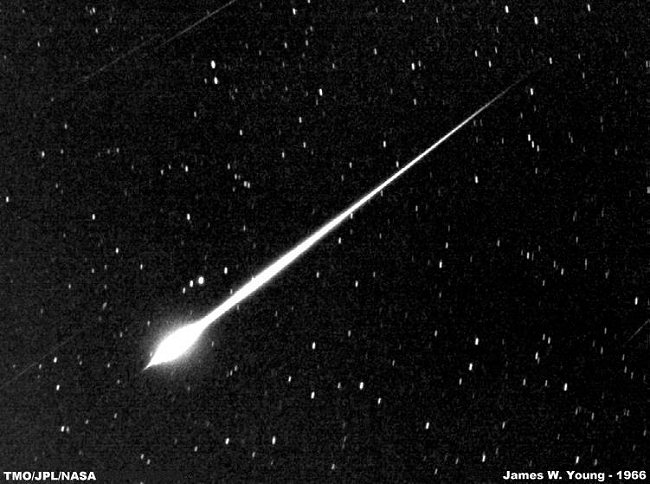 This photograph was taken with Kodak Plus-X 35mm film using a Zeiss-Ikon camera, with a 35mm
f/2 wide-angle lens, using a simple camera tripod. This 2 minute exposure was taken at an elevation
of 7500 feet at theTable Mountain Observatory operated by the Jet Propulsion Laboratory. This
photo was taken at 3:52 AM.

This very noteworthy meteor shower was nearly missed altogether, since the weather was cloudy all
evening to past 2 AM. As has happened before and since, I awoke at 2:30 AM and looked at the
clouds outside. Icould see many meteors through the thinning clouds, so went to the observatory by
3 AM as the completecloud cover dispersed! There were 2-5 meteors seen every second as we
scrambled to set up the only twocameras we had, as no real preparations had been made for any
observations or photography. The showerwas expected to occurr over the European continent.

The shower peaked around 4 AM, with some 50 meteors falling per second. We all felt like we
needed to put on 'hard hats'! The sky was absolutely full of meteors...a sight never imagined...and
never seen since! To further understand the sheer intensity of this event, we blinked our eyes open
for the same time we normallyblink them closed, and saw the entire sky full of streaks...everywhere!

A 'fireball' is an extremely bright meteor, sometimes bright enough to read a newspaper. During this
shower, we recorded 22 such meteors, all within 1 1/2 hours. It is estimated that the average person
sees 4 'fireballs' in their lifetime. The above 'fireball' cast heavy shadows for about 6 seconds, and
the luminous train left by itlasted about 10-12 minutes. We photographed over a thousand meteors
in 90 minutes.

This same meteor shower is expected to produce a fairly substaintual event this November, but
probably inthe Far East. If you are interested, look for this event 2 days on either side of November
17, 1998. It is alsopossible that the same time period in 1999 will produce a similar shower. However,
in any case, predictionsindicate showers far, far less intense than the 1966 event. But as I learned in
1966, it is better to be ready forsomething spectacular...that way the only thing you lose, will be sleep!

Table Mountain Observatory, operated by the Jet Propulsion Laboratory (JPL), is located just west
of the town of Wrightwood, California at an elevation of 7500 feet.