Mostly Bright Leonid Fireballs Seen During the 1998 Shower in California

The following five pictures were all taken near Soda Springs Road, about 36 miles west of
Blythe, California, November 17, 1998, in marginal to poor skies. Five individual 35mm cameras
all used Kodak Ektachrome 400X Professional film. The film was developed using the standard
E-6 processing technique at my home on November 21. 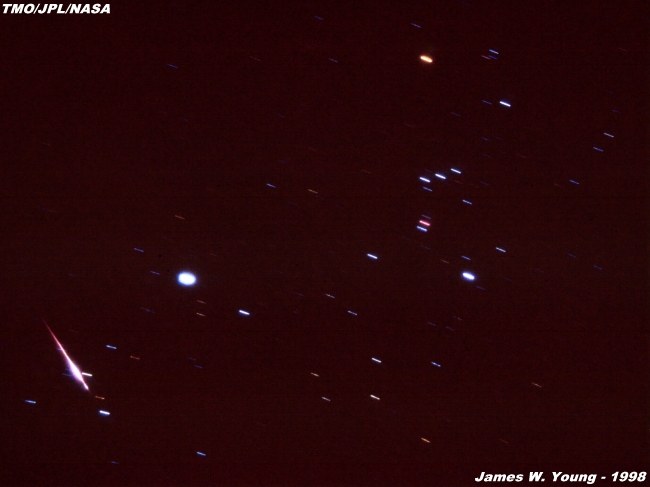 The above 4 minute exposure was taken with a Pentax K-1000 and a Tamron 35mm wide angle
lens set at f/3.8. I had just completed a longer exposure with this camera, and started this one at
1130 Z. This was the brightest fireball photographed this day, at -6 magnitude, crossing through
the lower section of the constellation Canis Major. The bright star to the left center is Sirius. The
constellation Orion is in the upper right center. Needless to say, I terminated this exposure before
the sky fog increased (as you will see in the other exposures). This particular area of the sky was
fairly free from the heavy cirrus cloud cover. Close inspection will also reveal irregular star trails,
the indication of cloud layers quickly moving from west to east during the short exposure. 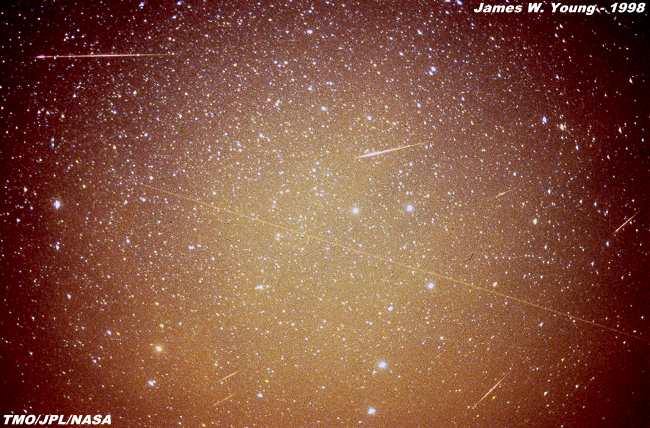 The above picture showing the Little Dipper to the lower left, and the Big Dipper on its handle to
the right center was taken at 0952 Z for 9 minutes. A Pentax K-1000 was used with a 28mm
wide angle Tamron lens set at f/2.5. There are a total of seven meteors on this frame, with the
upper left one being about -2, and the upper center right one about -3 magnitude. I was looking
at the Big Dipper when the -3 magnitude meteor flashed. There are also the blinking lights of some
aircraft from the upper left to the lower right. Can you find all seven meteors? 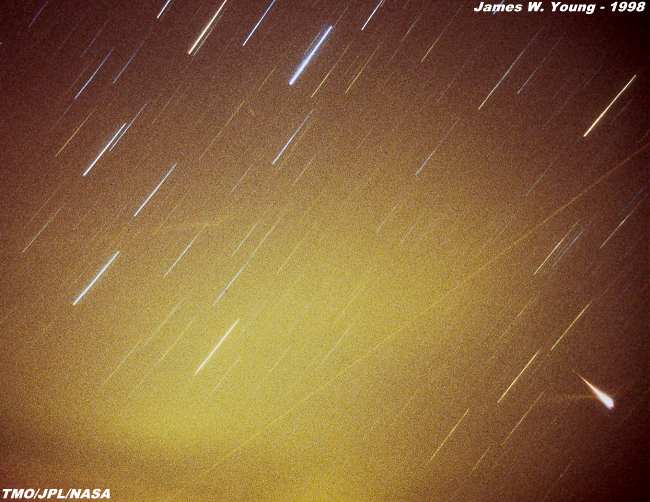 This picture was taken at 1047 Z with the Tamron 35mm wide angle lens set at f/3.8 for 6 minutes.
Study this picture carefully...to the left center is a wind swept 'train' left by a bright fireball I didn't
photograph. But while making an attempt at imaging that persistent 'train' (successfully), another
extremely bright fireball (-5 magnitude) was caught almost falling to the desert floor (lower right).
I imagine this could have been many hundreds of miles to the SE in Arizona, and certainly 3-4
magnitudes brighter there! Again, look carefully, for you can see the short beginnings of another
persistent train from this fireball as well. Notice also, both 'trains' are moving rapidly to the east.
The constellation Leo is in the upper center, and a very faint short meteor trail is seeen in the upper
left center. Also take note of the yellow orange glow on the cirrus clouds coming from the Blythe,
California city, as well as an extremely well lite state prison facility just west of Blythe. I'm sure you
have also spotted the aircraft 'trail' (the frame is tilted from the horizontal). 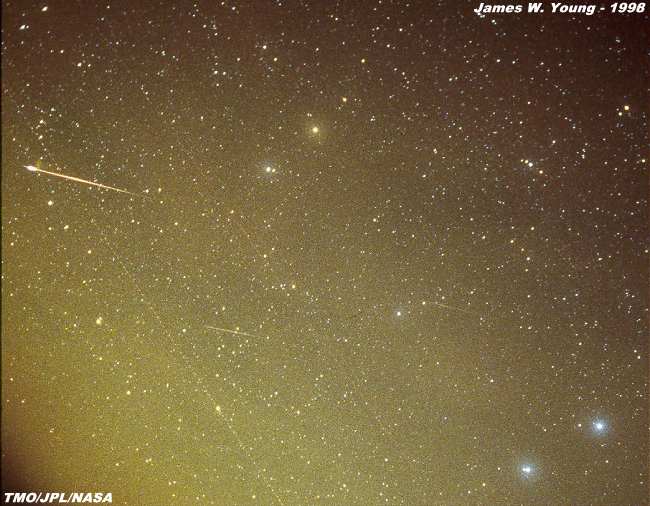 In this fourth frame, a -4 magnitude fireball and fainter Leonid cross the area north of the North
Pole. Beta Ursa Minoris is the brightest star in the upper center, and Mizar (in Ursa Major) is the
brighter star to the bottom right. This picture was caught with a Zeiss-Ikon 35mm camera and
Zeiss 35mm wide angle lens set at f/2 at 1016 Z for 11 minutes. Can you find the third meteor?
And, yes, there are two more aircraft 'trails'! 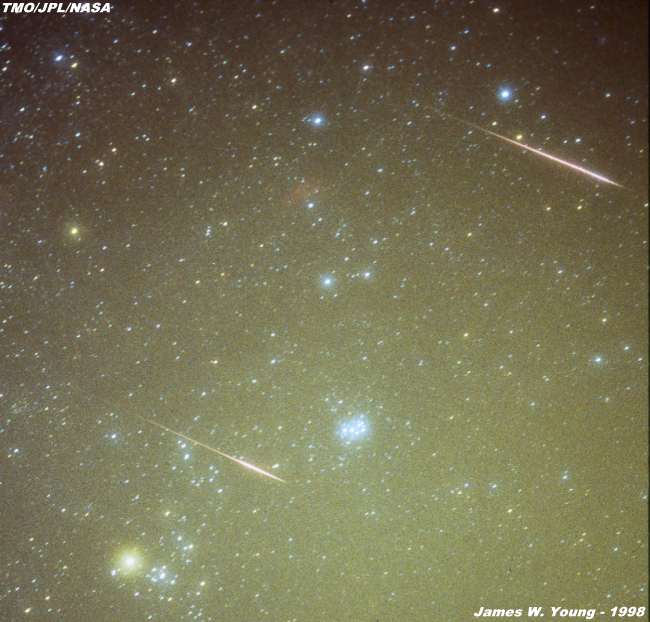 My parting shot, and farewell to the 1998 Leonid Meteor Shower is this 13 minutes exposure
taken at 0940 Z with the same Zeiss-Ikon set-up as in the fourth picture. Here we are looking at
the constellation Taurus with Aldebaren and the Hyades Cluster in the lower left with the Pleiades
Cluster in the lower center. The star Algol in the constellation Perseus is in the upper right. The
brighter fireball in the upper right was about -5, while the lower left one was about -3 magnitude.

Table Mountain Observatory, operated by the Jet Propulsion Laboratory (JPL), is located just west
of the town of Wrightwood, California at an elevation of 7500 feet.