The NEAR Spacecraft Swings By the Earth 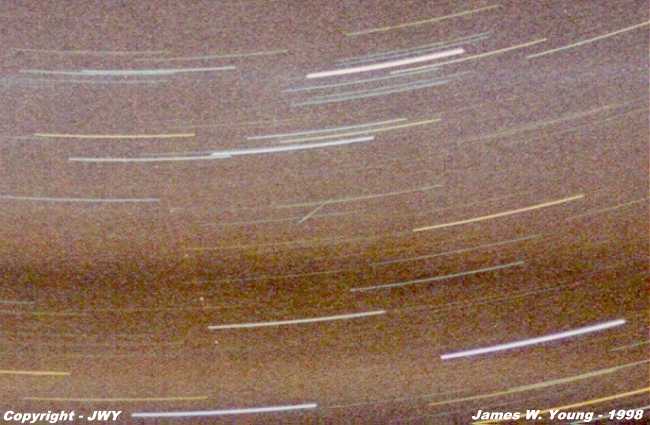 The NEAR (Near Earth Asteroid Rendezvous) spacecraft was photographed when it flew past
the Earth in an orbital sling-shot maneuver on January 23, 1998. The above picture shows the faint
trail ( in the center) of the spacecraft some 1000 miles from the earth, during this 26 minute timed
exposure begun at 1024 PM, local time. Many star trails are seen here in the constellation of Perseus,
the brightest one in the lower right is of the star Algol. I was at a site I have used before just south of
I-10 west of Desert Center, California. The faint line and red dots to the left were from a passing
aircraft.

In 1999, the spacecraft will rendezvous with the asteroid Eros. Once in orbit around Eros, NEAR
will spend almost a year for the first intense study of an asteroid, orbiting some 30 miles up.

My Pentax K-1000 35mm camera and 28mm lens set at f/2.5 was used to take this exposure on
Kodacolor 100 ASA film. Unfortunately, when taking the camera off the support tripod, I somehow
caused the camera to open! Although in a very dark site, some light entered the camera causing the
horizontal streaking on the film.