Planetary Conjunction with the Moon 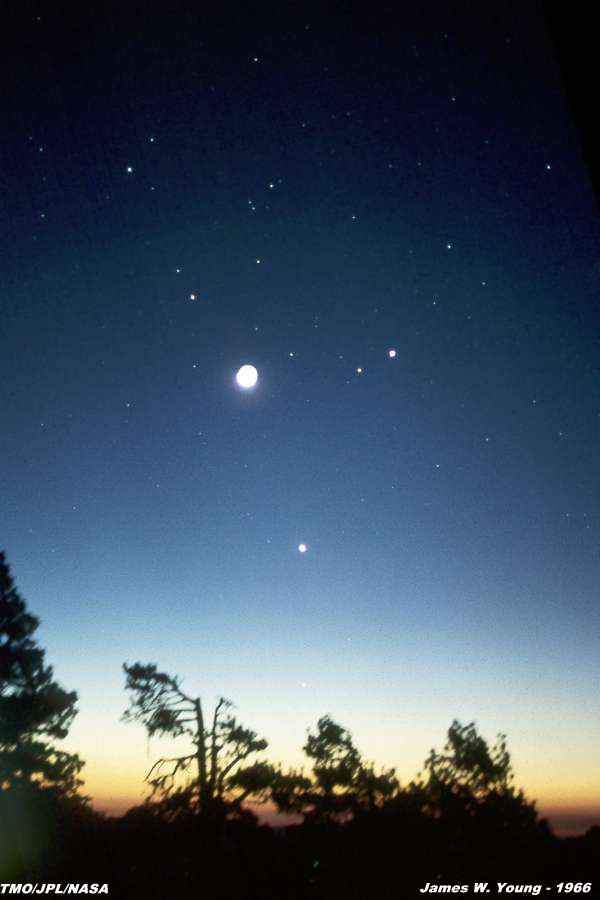 This planetary conjunction was taken with Kodak Kodachrome-X 35mm film with an ASA of 100
using a Zeiss Ikon 35mm camera with a 50mm lens at operating at f/2 on August 14, 1966 early in
the morning. This was a one minute exposure taken from a small tripod with a sidereal tracking drive
looking northeast. Careful inspection will reveal blurred tree images, since the camera was actually
moving for the timed exposure.

Look very carefully to find Mercury, for it is exactly in the middle (left to right) just above the trees. It
is in the brighter twilight area, and is almost lost in the glare...but it is there! The next planet up is Venus,
the brightest planet here. Further up, and slightly left is the crescent moon, but well overexposed (done
so to record Mercury) hiding the actual thin crescent. Directly to the right on the moon, is the fainter
Mars, then just right and slightly up is the planet Jupiter. Above the moon and continuing slightly left, are
Castor and Pollux, the two brightest stars in the constellation Gemini.

Ths conjunction, one of the most beautiful I have seen, was ironically, the 5000 observation logged in
the observatory's original logbook.