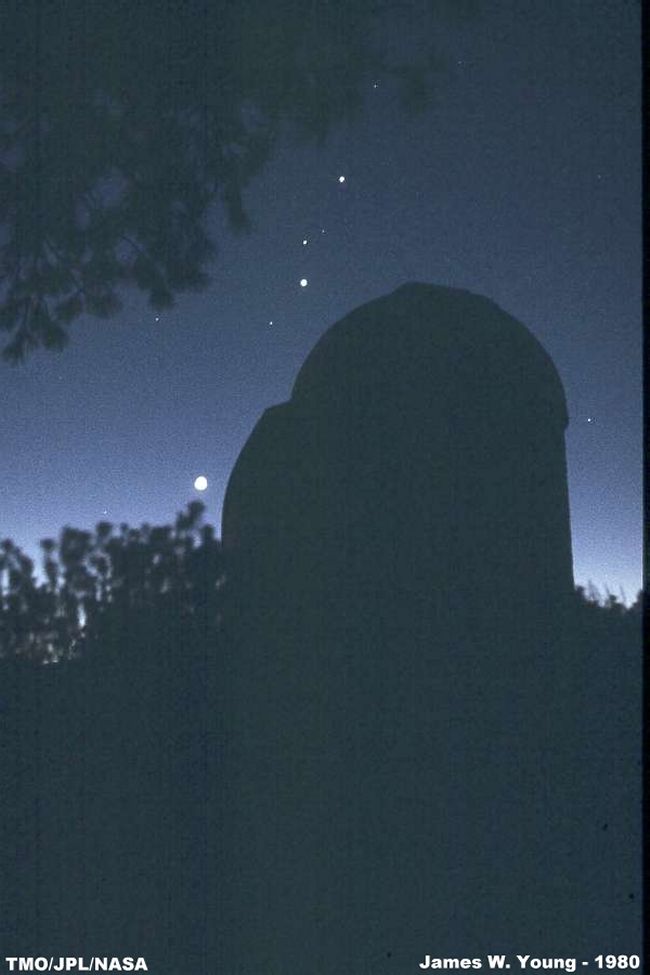 When several planets and even the moon get close together as seen from the earth, the event is called a
planetary conjunction. These events occur every few years, and are a natural result of the positions these
objects appear in as they revolve around the sun (planets) and the earth (moon). During these beautiful
displays lasting weeks (only a few days with the moon), astronomers get far more calls from the general
public wanting to know what 'they' are seeing. Although these phenomena can occur most anyplace in
the sky, they are more spectacular when the crescent moon is a part of the conjunction, and are best
seen after sunset, or before sunrise, depending upon the alignment circumstances. With more people up
at these hours, and the colors of sunset and sunrise as an additional attraction, greater numbers of the
general public see these events.

This particular 'planetary show' was photographed at Table Mountain on November 5, 1980 with 35mm
Ektachrome 100 ASA slide film with the Zeiss-Ikon 35mm camera using a 35mm wide angle lens set at
f/5.6 for a 5 second exposure.

In the left center is the overexposed crescent moon. As one looks up and to the right, the first faint object
is the star gamma Virginis, followed by the bright planet Venus, Saturn, the star eta Virginis, Jupiter, and
lastly, just in the tree limb, beta Virginis. Directly above the moon, and nearly in another tree limb is the
star delta Virginis. In the center of the picture is the silhouette of the 16-inch telescope dome. Just to the
right of the building is the star gamma Corvi.