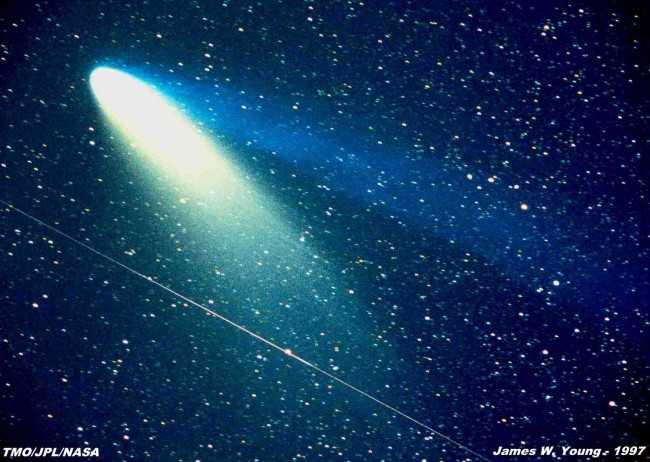 This photograph was taken with Kodak P1600 Professional Ektachrome 35mm film using a Zeiss-Ikon
camera with a 250mm f/4 telephoto lens. This 10 minute exposure was processed E-6 to a speed of 1600
ISO using a JOBO CPE2 plus color film processor. The camera was set up on an Edward R. Byers Cam-
Trak operated by a small battery for sidereal tracking.

The picture was taken in the Angeles National Forest just 45 miles NNE of Los Angeles overlooking the
Mojave Desert. A Bright Virginid meteor appears as a broken dashed (an artifact of html) streak below
the comet. I was fortunate to have actually seen the meteor, otherwise I might have not known whether it
was a satellite or meteor!

The circumstances surrounding this particular picture of Hale-Bopp is quite unusual! Some 60 pictures of
the comet were taken between February and May 1997; all planned high elevation dark sites specifically
choosen to best capture the fainter blue gas tail. On this date of March 17, it was cloudy all evening well
past midnight, the time when I would leave for one of the dark sites. I choose to forget photography that
night, and went to bed. I awoke at 3 AM by chance, and found the sky perfectly clear. I had no time to
go to any of the dark sites normally used, so I drove about 15 miles west along the backside of the San
Gabriel mountains and found a short dirt road pointing toward the east about the time the comet was high
enough to photograph. I set up the camera, and started the first exposure at 3:48 AM. Within seconds,
the bright meteor streaked through the frame! This has turned out to be the most asked for photo of the
comet of the some 60 I took, yet it was taken at the poorest site at the lowest elevation and the brightest
skies with the least amount of preparation!