Another view of Comet Hale-Bopp As Seen in Late April, 1997 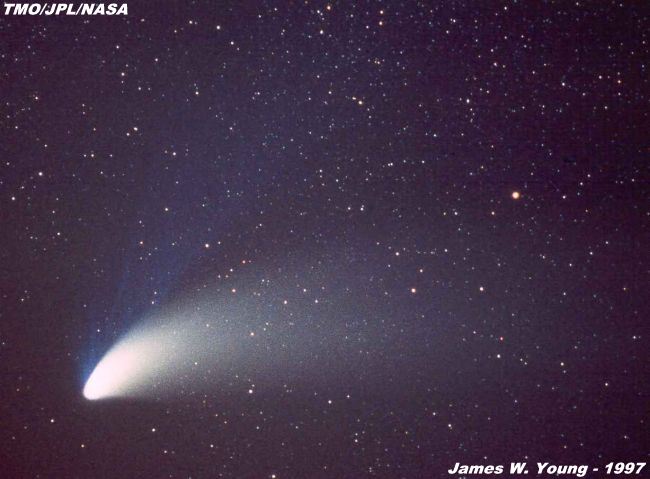 This picture was taken from a vantage point high above and east of the Wildrose Ranger Station
near Mahogony Flats near the western edge of Death Valley National Park. This site was used
several times to photograph Hale-Bopp, and had remakably clear dark skies. It was, however,
nearly fours hours from Wrightwood to actual camera set-up completion. On the other hand,
we never saw headlights or anyother form of artifical lighting.

Here in this picture, the comet shows a much wider and more spread out dust tail (white), as
well as a broader and less vivid blue gas tail. The bright star to the right center is iota Aurigae.

Comet Hale-Bopp was over a 100 million miles from the earth at closest approach in the spring of
1997. Just the previous year, Comet Hyakutake (check here) was less than 10 million miles, but in
fact, a much smaller comet. Had the two been switched in distances, Comet Hyakutake would have
been a very faint inconspicuous object, and Hale-Bopp would have filled the skies with its bright tail!