An Iridium Satellite Flash Seen Over the Table Mountain Observatory 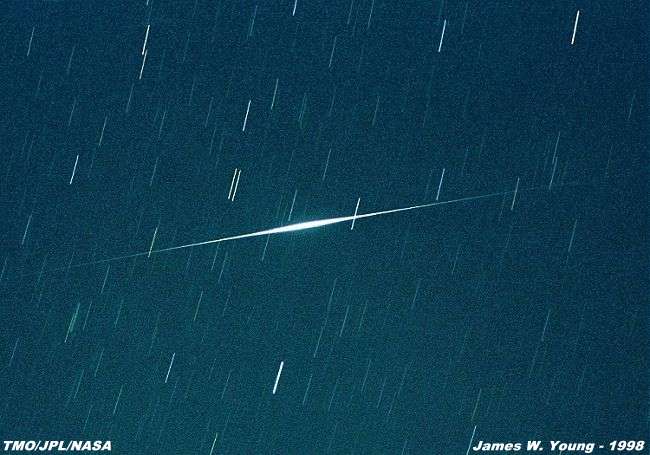 Iridium satellites are a new form of small telecommunication satellites, operated by the Iridium LLC
Corporation, with Motorola being the prime contractor. There are currently 72 operational satellites
orbiting the earth about 480 miles up, and in nearly polar orbits with an inclination of 86 degrees. Since
each satellite has three main mission antennas, with large flat highly reflective surfaces, when the
geometry is correct, sunlight is reflected off one of these surfaces to various parts of the earth at
various times that can be predicted very accurately! Do you want to see these incredible flashes? You
can see more information about these unusual satellites by clicking here! You can further obtain actual
predicts for you to see these unusual 'flashes' no matter where you are. Obtain you geographical
coordinates, as accurately as possible, and click here for current sightings at your location.

Depending upon the geometry, you may see some flashes that are not as bright as others. The actual
predictions will indicate which are the brightest. The brightest satellites I have seen have been up to
magnitude -7! And, rest assured, the times, brightness, and direction to look are very precise. You
will need to know where north is from your location, and understand that the azimuth angle stated is
the angle in degrees from north going to the east or to your right as you are facing north. North is an
azimuth angle of 0 degrees, 90 is due east, 180 is due south, 270 is due west and 360 (0) is due north.
The elevation angle is the degrees above the horizon in the azimuth direction given. 90 degrees in this
case is straight up, or commonly called the zenith.

The following picture was obtained on October 11, 1998 of another Iridium satellite just before 7 PM.
The sky was still quite bright, as the sun had set only 20 minutes earlier. The open dome shutter and
door of the 24-inch telescope facility at Table Mountain is seen at left. The Iridium satellite is the white
verticle line to the right of the picture. 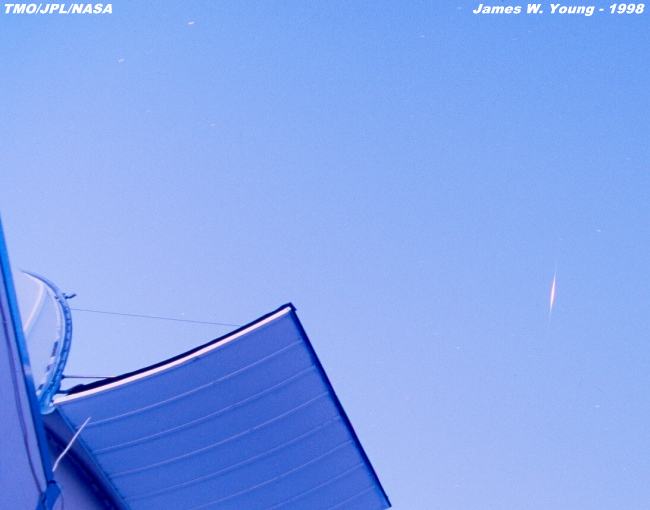