Argon Laser Shot to the Moon 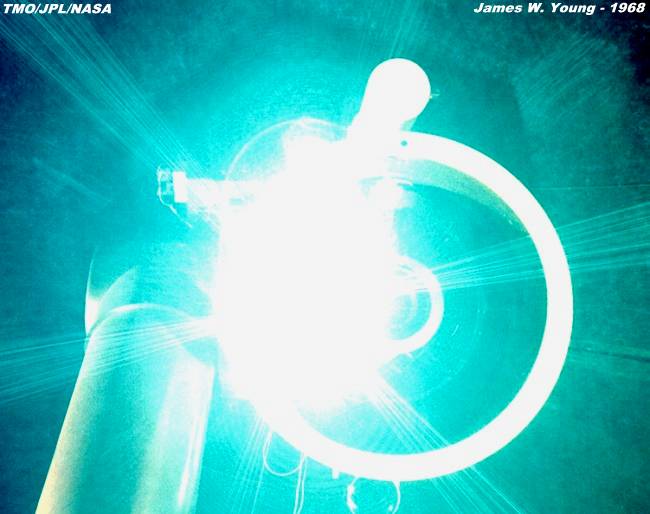 This photograph was taken with Kodak Ektachrome 35mm film at 64 ASA with a Zeiss-Ikon 35mm
camera and a 50mm lens operating at f/5.6. The picture was taken standing on the flat roof attached to
the 24-inch telescope building over the coude room. It was nighttime, and we could not look into the
laser beam, so the camera ,mounted on a tripod ,was placed into the 24-inch diameter collimated laser
beam and a 1/60 of a second exposure was taken using a long cable release. It is also noteworthy to
remind the reader that the amount of laser light that entered the camera was only 0.01% of the entire
laser beam that was sent to the moon. This picture was taken during testing of the laser on January 16.

It is very difficult to give an adequate explanation of the eerie and unusual sensation of standing in the
laser beam looking out into a dark sky. Although the beam of light was dangerous to look directly at,
it was not dangerous to stand in, facing the other way; ie, it wasn't hot as one might think. We were very
careful photographing the beam in this manner.

The laser was on loan to the observatory from the Hughes Aircraft Company, and was an experimental
water cooled system still in the testing stage. The laser was collimated to the f/36 focus of the coude
optical mode of the 24-inch telescope. The actual experiment took place in the winter of 1968, when
the local water supply was about 40 degrees F. After the water, running full throttle so to speak, went
through the laser during operations it exited at nearly 190 degrees F. We were told during the initial
tests, that if the water went off while the laser was on at full power, we would have about 10 seconds to
vacate the building before it exploded!

This laser was successfully collimated, focused, and aimed to produce an intense beam of light all the way
to the Surveyor VII spacecraft on the lunar surface, some 240,000 miles away. The laser beam had to be
so carefully collimated and focused to the focal ratio of the telescope, the beam had to pass through a
hole 0.5mm in diameter. At this point the beam would penetrate and/or burn your skin instantly! During
actual times of laser transmission through the telescope, the laser could not be turned off, but rather
blocked by a cube of brass with an insulated handle attached. Of course, the blocking cube was not
placed at the focus, but rather some 12 inches beyond. Even so, after blocking the beam for 10 minutes,
the cube of brass was too hot to touch directly.

We were successful in actually hitting the spacecraft with this beam, the first experiment of its kind, but
not the last. The experiment was also successful from the Kitt Peak Observatory with another scientific
team using the long McMath solar telescope facility. The next photograph will show you the results
taken from the Surveyor VII spacecraft itself.