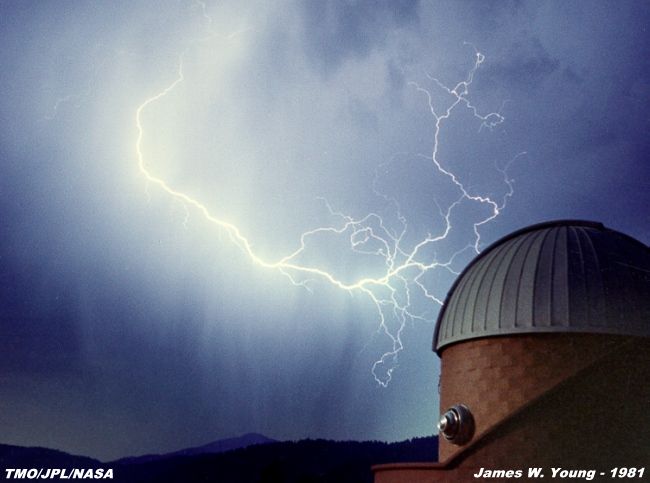 This color photograph of Lightning in the skies above Table Mountain was taken with Kodak Kodacolor
100 ASA 35mm film with a Zeiss-Ikon 35mm camera using a 35mm f/2 wide angle lens on September
17, 1981 around 10 PM. This and subsequent 'strikes' were actually several miles to the SE over the
ridge in the background. The camera was mounted on a tripod, under the eaves of a nearby building, as
it was raining very hard with no wind. This was a 20 minute exposure taken while I was actually in my
office. I never saw the lightning 'strike' itself! It wasn't until a few days later when I got the pictures back
that I realized the 'prize' I had.

Ironically, several hours after the storm had passed, I discovered a fire on the background ridge (as seen
in this photograph), probably caused by a strike other than this one pictured here. It was put out the next
day by the USFS, as it was just an old obscure tree trunk away from other trees, and not threatening to
the surrounding forest.