Craters on the Moon 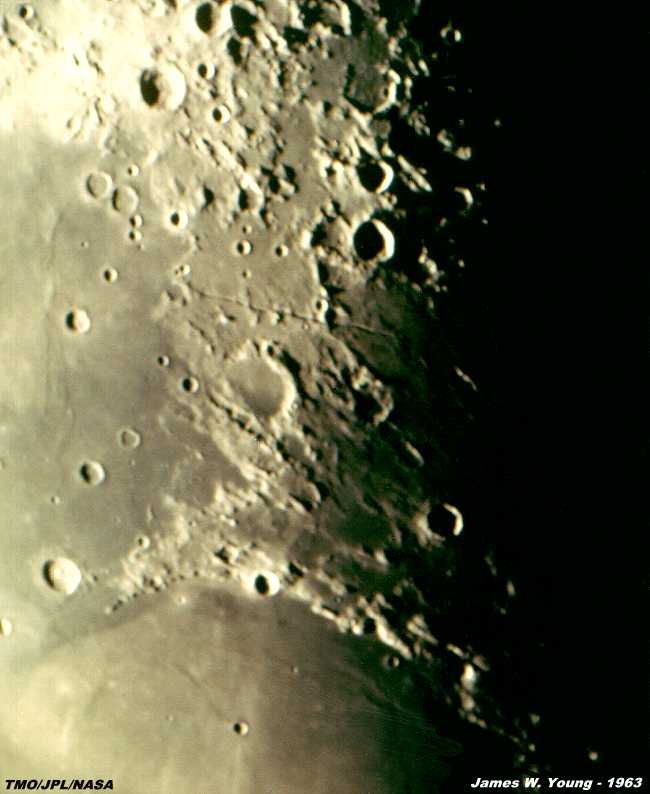 This photograph was taken with Kodak High Speed Ektachrome 35mm film at 100 ASA with a
Zeiss-Ikon 35mm camera attached to a 16-inch reflecting telescope operating at f/20, on March 2,
1963, and processed by Eastman Kodak. This picture was a 1/4 second exposure.

This picture shows the craters Delambre in the top left center, the partially filled crater Julius
Caesari n the center, and Plinius on the lower left edge. The Haemus mountains partially encircle
Mare Serenitatis in the lower center and the Ariadaeus Rille (thin straight line) is seen in the upper
center running from right (terminator or shadow side) to the left. Mare Tranquillitatis is seen
from the left center to upper left area. It was here that the first lunar mission, Apollo 11, landed in
July, 1969 (The actual site is in the extreme upper left corner).

Table Mountain Observatory, operated by the Jet Propulsion Laboratory (JPL), is located just west
of thetown of Wrightwood, California at an elevation of 7500 feet.