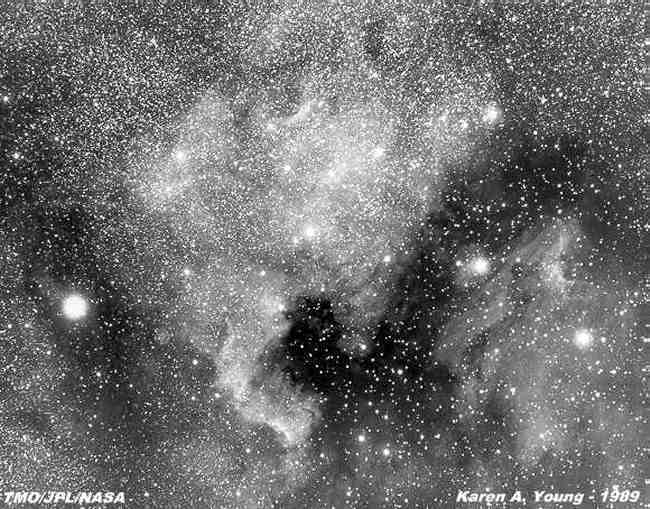 This black and white photograph of the North American Nebula was made on September 9, 1989 with
Table Mountain's 10-inch Schmidt camera at f/2. The exposure was made with Kodak 4415 sheet film
with an ASA of 150 for 60 minutes, and processed in Kodak Dektol developer for 3 minutes at 68 F.
The observer was Karen A. Young, N6PJL, and wife of W7FTT.

Over the years, some have not always found 'North America' in this picture. Mexico and Central
America extend down just the the left lower center. Florida is a little wide, and not too distinct, to the
right past the dark Caribbean Sea. To the far right center is the Pelican Nebula, IC 5067. You are seeing
the pelican from behind, and the wide beak extends downward and to the left at about a 45 degree angle.

The 'IC' in IC 5067 stands for Dryer's additional catalogue, the 'Index Catalogue'...which were additions
to his original New General Catalogue (NGC).

This extensive nebulosity can be detected with the naked eye under extremely favorable conditions, and
even better seen in low power large aperture binoculars like 7X50's. The nebula is embedded in a mass
of stars in the Milky Way, and is photographed best with red sensitive film or detectors. Kodak 4415
film is quite red sensitive.