The North American Nebula In Color 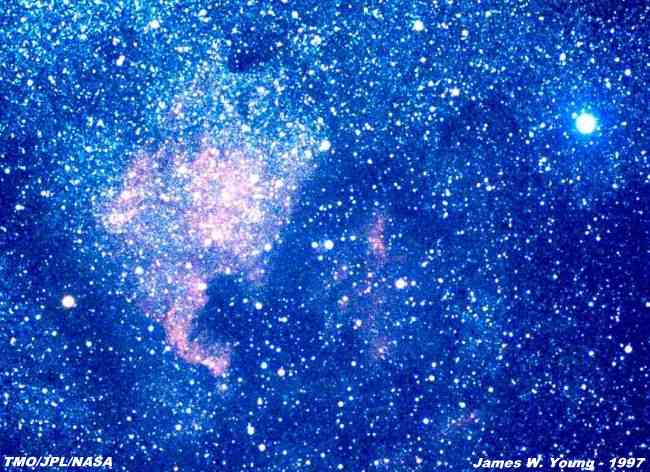 This picture was taken on September 8, 1997 in the earlier morning hours during tracking tests of the
10-inch Schmidt telescope at Table Mountain. A 35mm camera was piggybacked onto the side of
the Schmidt telescope.

A bright and fairly large nebulosity of gas and dust in our own Milky Way galaxy is seen here in the
constellation of Cygnus . It was catalogued by Dreyer from previous observations, and given the
number of NGC 7000. This nebula was frequently seen in many of the color pictures taken of Comet
Hale-Bopp in the Spring of 1997, since the comet passed fairly close to it. In this picture, the nebula
is to the left center, and the very small and faint area to the right center is the Pelican Nebula, known
as IC 5067-70. Dreyer expanded his catalogue late in the 19th century with his 'Index Catalogue',
thus the introcuction of 'IC', and frequently shortened to just 'I'.

Surprisingly, the darkish bands swirling throughout the frame are not a lack of gas and nebulae, but
rather the presence dark foreground gaseous matter blocking the brighter background nebulosity.