The Orion Nebula with a Geosynchronous Satellite 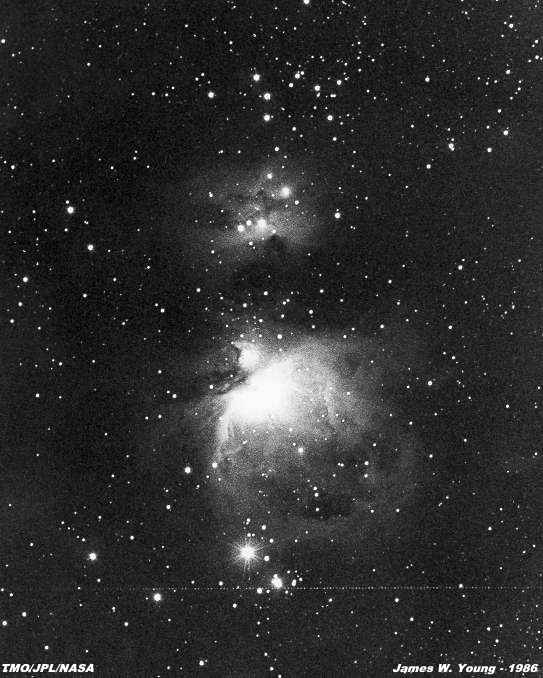 This black and white photograph of the Orion Nebula was made from Table Mountain on Kodak
Royal-Pan sheet film with an ASA of 400. The Table Mountain 10-inch Schmidt camera was used
at f/2 on March 3, 1986 at 0526 UT for this 10 minute exposure. The camera has a 14-inch primary
mirror, and is primarily used for comet photography. The camera was purchased from Mr. Ted
Haberman, who acquired it in 1974 from a source in Ohio. This particular Schmidt camera was the
prototype of the famous Mt. Palomar 48-inch Schmidt used to make the Palomar Sky Survey in the
early 1950's. The camera was completely overhauled and reasembled by myself in 1984-85, and
spending over 200 hours, in preparation for Halley's comet in 1986.

In the above photograph, with south at the top, the Great Orion Nebula is seen in the upper center,
over 1 degree in diameter. This is known as Messier 42, named by Charles Messier in his observer's
notebook on March 4, 1769. Messier was a comet hunter, and kept finding 'fuzzy' patches in the sky
that were not comets...so he catalogued them, some 103 objects. This one is number 42. Attached to
the bottom edge is a small wedge shaped object he catalogued as Messier 43. Astronomers now refer to
them as M 42 and M 43. Still further below is another fainter and lesser known nebula, catalogued by
a next century astronomer, Dreyer, as number 1977. His catalouge was called Dreyer's 'New General
Catalogue', or NGC. This object became NGC 1977, and M 42 and M 43 became listed in Dreyer's
catalogue as NGC 1976 and NGC 1982, respectively.

The Orion Nebula is one of the brightest, closest and youngest nebulae in ourMilky Way Galaxy. It
is roughly 1000 light years from the solar system, and may be as young as 30,000 years. It is one of
the most studied regions of star formation areas, and the Hubble Space Telescope (HST) has recorded
numerous star birth areas similar to what our solar system may have looked like a few billion years ago.

Look closely along the upper part of the picture...you can see the flashing of reflected sunlight on a
geosynchronous satellite as it crosses the picture from right to left. Geosynchronous satellites are in
high earth orbits, and remain somewhat fixed in space relative to us here on earth. They bring us all
sorts of weather, TV and communication audio and video. The above satellite, like all geosynchronous
satellites are in orbit around the earth above the equator, and revolve around the earth in 24 hours, thus
they appear to be fixed above a particular 'longitude'. They are about 23,000 miles above the earth.
This may be one you have your satellite dish pointed to at times!