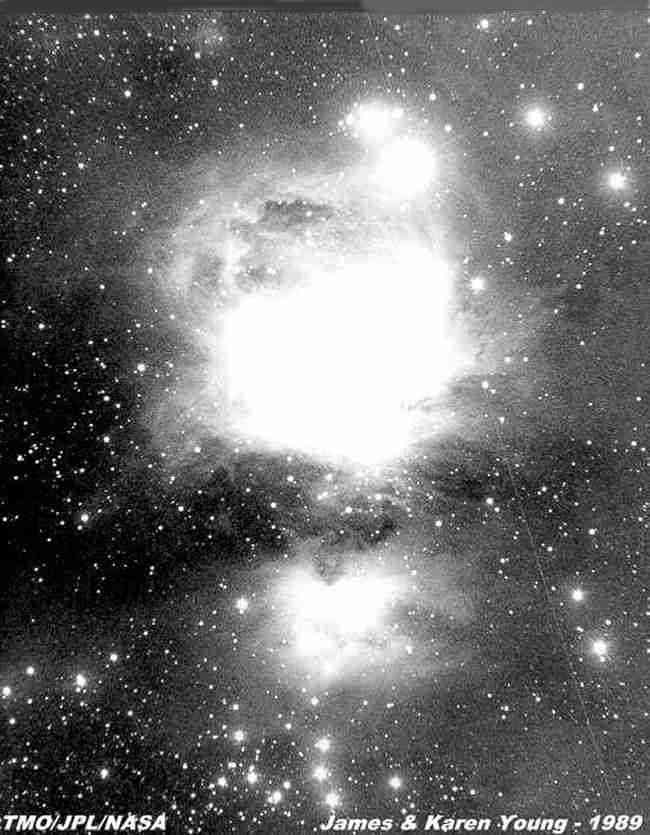 This picture was taken September 9, 1989 using the 10-inch Schmidt operating at f/2. The 1 hour
exposure was taken with Kodak 4414 sheet film starting at 1030 UT. This great gaseous nebula
is the birth place of many new stars and potential solar systems like our own. The circular portion
in the center is referred to as the Great Orion Nebula. When Charles Messier catalogued this
particular object, he called it M 42, with a portion in the lower right as M 43. In this photograph,
M 43 is so overexposed, it blends with M 42 itself. Compare this picture with another exposure
obtained with the same instrument in 1986 by clicking here . In that picture you can see M 43 as
a small triangle shaped protrusion to the lower right of M 42. In the above picture, the large gas and
dust cloud seen near the top is NGC 1977, so catalogued by another astronomer, J. L. E. Dreyer.
Whereas Messier catalogued some 100 plus objects a century before, Dreyer catalogued more than
13,000 clusters, nebulae and galaxies.