Three Bright Perseid Meteors as Photographed From the White Mountains

This picture was taken on August 12, 1994 at the Grandview Campground in the White Mountains
east of Bishop, California at an elevation of 8500 feet. This 0 magnitude meteor was seen to travel
over 80 degrees of the sky, and the picture only shows its brightest path, some 20 degrees. The
diagonal streaks are star trails during the 45 minute exposure on Kodak Ektachrome 200 ASA film.
Some of the star trails are irregular, due to clouds that moved through the field during the exposure.
A Pentax K-1000 35mm camera was used with a 50mm lens set at f/2, starting at 2:15 AM PDT.

This 30 minute exposure of the summer Milky Way was captured with a Zeiss-Ikon 35mm camera
and a 35mm wide angle lens set at f/2, all on Kodak Ektachrome Professional P1600 film, processed
for 1600 ASA. Taken on August 12, 1997, the picture was captured from the same White Mountain
campground site as above at 2:17 AM PDT. In this picture, you can find the North American Nebula
at the extreme top right, with the bright star, Deneb, just below (in the constellation Cygnus). At the
very bottom right is the bright star Vega, in the constellation Lyra. To the extreme left center, is another
bright star, Altair, in the constellation Aquila. These three bright stars form the 'summer triangle'. Running
from the upper right to the lower left is the Milky Way...and look closely for the bright Perseid meteor
almost lost in the Milky Way brightness to the left center. This frame was taken using an Ed Byers Cam-
Trak at normal sidearl rate. 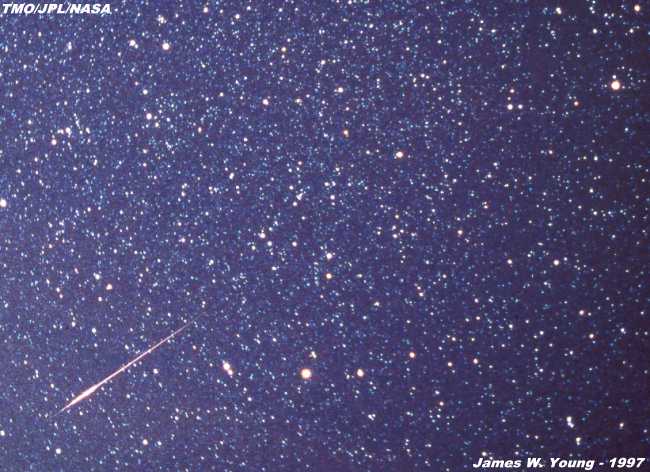 The Perseid meteor photographed here was obtained on the same morning, but was only a 6 minute
exposure at 3:52 AM PDT using the same camera and film.  The meteor trail in this picture was
much shorter and much brighter at about magniture -2. In the frame you can find Polaris, the north
star at the upper right edge.  The Little Dipper (Ursa Minor, or 'Little Bear') constellation curves
downward to the left from Polaris. The 'bowl' of the dipper is in the bottom center of the picture.