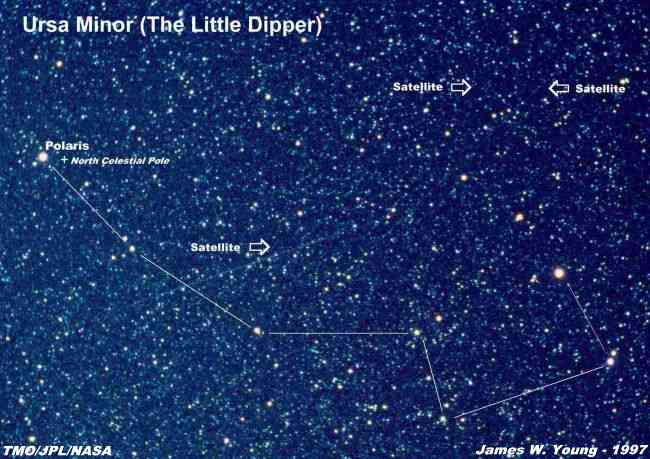 This picture was taken during a trip to Death Valley NP to photograph Comet Hale-Bopp on April
27, 1997. The sky was exceptionally dark at this site near Mahogany Flats, so I took other pictures
after the comet set in the west. On the above photograph I have artificially connected the main stars
with lines to give a better idea of the 'dipper' shape of this constellation...the 'bowl' in the dipper is
off to the lower right. With careful inspection you might be able to see the three satellite trails also
recorded during this 20 minute tracked exposure started at 9:25 PM PDT. The north star, Polaris,
and the North Celestial Pole (NCP) are indicated off to the left. The axis of the earth is pointed at the
NCP, only 3/4 of a degree from Polaris.

The Zeiss-Ikon 35mm camera with a 55mm lens set at f/2 and Kodak Ektachrome Professional
P1600 slide film processed to 1600 ASA was used to acquire this picture. The Ed Byers Cam-Trak
was also used for tracking purposes.