Venus at Sunrise From Table Mountain 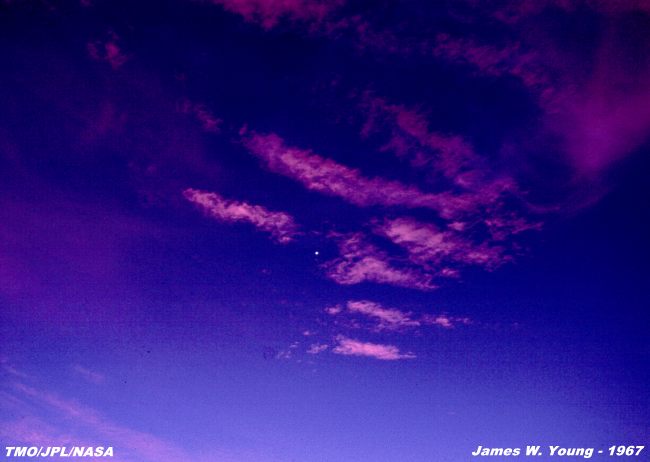 This picture was taken on November 4, 1967 just outside the 24-inch telescope facility at the
observatory. Here, Venus is seen in the pinkish colored cirrus clouds a few minutes before sunrise.
The date was very near the time of greatest elongation west for the planet (47 degrees). Since
Venus and Mercury have orbits around the sun within the earth's orbit, these two planets can
never be seen late at night, or for that matter, very high in the sky. Both planets, but primarily
Venus, are referred to as the 'morning' or 'evening stars'. The time between successive western
elongations is around 585 days, or commonly called the synodic period. From greatest eastern
elongation (evening star) to greatest western elongation (morning star) is 144 days, or a little more
than 4 1/2 months, but from western elongation to eastern elongation is about 440 days, or 14
1/2 months. Venus will be at superior conjunction (on the other side of the sun) on October 30,
1998, so it will not be the evening star until spring of 1999, with greatest eastern elongation
occurring on June 11.

The Zeiss-Ikon 35 mm camera with a 50mm lens set at f/5.6 was used to take this 1/2 second
exposure on Kodak Kodachrome 64 ASA slide film.